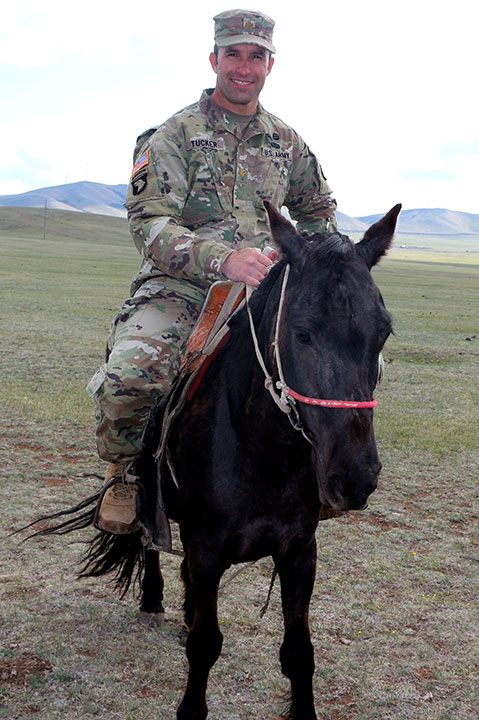 A sense of duty led Dr. Rick Tucker to enroll in the US Army once he completed veterinary school. Dr. Tucker was raised in the San Diego area in a family with a strong record of military service. However, he envisioned a career as a large animal veterinarian and a family with his wife Heidi, who was originally from Visalia California. His junior year of veterinary school at UC Davis in 2001, but soon the world was reeling from the horror of the terrorist attacks on September 11. Rick read an article in JAVMA about Lt. Colonel Holland who worked in Iraq civil affairs but was killed in a roadside bomb. The article said the Army needed people with large animal expertise so he approached a recruiter, and joined hoping that he could ease the burden of at least one actively serving veterinarian.

The Army is the only Department of Defense branch with clinical veterinarians: these veterinarians provide care for the military animals in all service branches. Of course, the most common animals these veterinarians care for are military dogs, notably, the Belgian Malinois used all over the world -- in Afghanistan, Washington, DC, and on military bases everywhere. These dogs provide security and search out drugs and explosives. The Air Force also has dogs while the Navy has dogs, dolphins, and sea lions. Army veterinarians also engage in local trust building, for example working with livestock to teach locals how to manage disease, improve production, and become more financially self-sufficient.

When Rick joined the Army, he was first sent to Fort Sam Houston in San Antonio for a year of training, and then headed to Fort Lewis in Tacoma, Washington where he worked in the base veterinary clinic, and Afghanistan as a Captain. In his 13th year in the Army, he is now a Lieutenant Colonel. he has been stationed with his family at Fort Lewis, twice at Fort Bragg in North Carolina, Fort Sam Houston (where the military dog center is housed), and at Davis while in the MPVM. Recently he was sent to Fort Carson in Colorado. He has also traveled to Senegal, Mali, Chad, Mauritania, Burkina Faso, Afghanistan, Kuwait, Jordan, Mongolia, Germany, and Belgium: in some of those countries, he worked on agriculture development, at times honing his skills and engaging his passion for camels.

In 2012, Rick applied to the Army’s LTHET professional development program and was accepted, receiving funding to attend the MPVM. He knew that he was a good veterinarian and soldier, but he wanted to do more. He felt the MPVM would help him learn to design experiments, assess population health interventions, calculate required sample sizes to show significance, and summarize and translate research data for commanders. These skills would allow him and the Army to increase the effectiveness of their work. For example, with the skills from the MPVM, he advised the 95th Civil Affairs Brigade on how to conduct an intervention and free vaccine program in Chad, where there was a serious bovine pleuropneumonia epidemic among cattle near the border with Nigeria. In that region, Boko Haram is very active and border control of cattle movement is very difficult, requiring creative solutions for a successful quarantine and vaccination campaign. He’s also worked with Persian Gulf nations and NIAID veterinary officers to improve beef production and manage export requirements and quarantine. As part of the US Special Operations Command, having the MPVM has helped him advise commanding generals in charge of COVID response, especially because he is able to interpret scientific and medical literature. He can translate science to herd health and help the Army understand all the new terms that we all hear about these days, like “herd immunity” and R-nought.

Rick is now the Commander of the 438th Veterinary Detachment of 60 personnel including veterinary technicians and 10 veterinarians who must be ready at any time for deployment. That means their licensure and clinical skills must be in order, they must be physically fit, combat-trained, and weapons-proficient, and they and their families where relevant must have their affairs in order so that they can head overseas.

Rick’s career as an Army veterinarian creates certain challenges and opportunities for his family. His first son was born on the day of his veterinary school graduation, and Heidi and he have had three additional children (all boys) while he was in the Army. His kids love the rural life at Fort Carson, catching gopher snakes, hiking in the woods. Rick is also engaged in faith-based work with his Protestant Reformed church. For example, he worked in Swaziland helping an HIV orphanage improve their livestock production program to improve food security and raise revenue for the children. Snakes, camels, dogs, kids- Rick seems to love them all, and to thrive on the many opportunities for service that veterinary medicine, the MPVM, and the US Army have provided.